Mahayana vows will be given on Friday, 7 AM. Therefore, participants have to arrive on Thursday evening in order to attend the retreat. 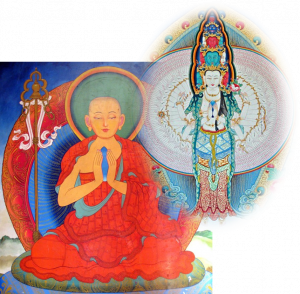 The Nyung-Ne practice is a fasting ritual with great purification potential, which is widely practiced in Tibetan Buddhism, also amongst lay practitioners.

This practice of the 1000-armed Avalokitesvara was introduced by Gelongma Palmo. She was born around the 10th century as a princess in an Indian empire located in today’s Kashmir region. Instead of living a life in luxury she decided to become ordained during early adulthood. She studied dharma sincerely and deeply, and therefore her teacher soon appointed her as abbot of a monastic community.

Not long after this, she developed leprosy, which worsened more and more. She lost her fingers and her feet, so she could not hide her condition any longer and was forced to leave her monastic community. Despite of her misfortune, she did not loose her faith in dharma. She was deeply motivated to achieve bodhicitta, and soon she had a vision of the 1000-armed Avalokiteshvara. For many years she performed his practice, which involved fasting and keeping silence, and finally she was cured of her leprosy.

The Guru Rinpoche Practice „Konchog Chidu“ („The Essence of the Three Jewels„), is a Terma text (treasure text) discovered by the great Terton (treasure finder) Rigdzin Jatson Nyingpo. It has extraordinary power to remove any kind of hindrance.

The special blessing of this sadhana is described in the „Prayer which Radiates the Light of Blessing„, a prayer of devotion to Guru Rinpoche:

„… However – in this degenerate time (these teachings) are a jewel that is poised on the head of a poisonous snake. If I, in these unclear and dark times, make a heartfelt promise with strong longing that stirs the depths of the vajra samaya of the deities of the Three Jewels and the Three Roots, then the extraordinary power of the Lamas – the Holders of the Three Kinds of Transmission, the Yidams and the multitude of the Dakinis, and the ocean of Dharma protectors, as well as through the power of the unchangeable, the truth, the nature and independence of phenomena – will allow the richness of the essential teachings to shine brightly, as the sun and moon bring light into the darkness, and bring to an end the darkening of unjustified attacks. May their victory secure this tradition of deep truth!
The excellent tradition, transmitted by Orgyen Rinpoche and the wisdom holders, has power over the three worlds and subdues the three kinds of existence. It is universally victorious and transgresses all appearances of phenomena. May it spread everywhere!“ 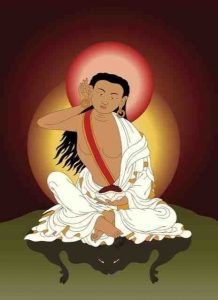 Jetsun Milarepa had committed serious crimes in his youth and killed with black magic a large part of his family, and he was seized by a desperate remorse. He was looking for a teacher who could show him the way to get rid of the entanglement of the never-ending cycle of existence, and found him in his teacher Marpa.Marpa treated Milarepa with unimaginable severity before giving Milarepa the meditation instructions he desired. By unwavering faith in his teacher and the great energy with which he gave himself in his practice, Milarepa succeeded in acquiring enlightenment in one lifetime. He is famous for his spontaneous poetic songs in which he gave expression to his profound teachings.

Son of the lineage of Lord Naropa’s path of liberation,please bless this beggar that he stay in mountain retreats.Do not be swayed by the demon of worldly distractionsbut deepen meditative concentration.Without getting caught in clinging to Shamatas pondMay the flower of Vipashyana blossomUnaffected and untroubled by stress and tension,Let the foliage of simplicity unfold.Without the slightest discord in my RetreatLet the fruit reach maturity – experience and realization.With the demons family powerless to hinder it,may I gain final certainty to understand my mind.On the way of skillful means, unclouded by doubtmay the son find his way in the footsteps of his father.Blessed and compassionate, essence of Akshobhya,please bless this beggar to remain in mountain retreats.