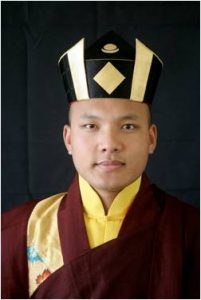 The Karma Kagyu lineage is one of the four main schools of Tibetan Buddhism. The head of this 900 year old tradition is the Gyalwang Karmapa, which means „The Victorious One of Enlightened Activity“. The characteristic of the Karmapas is the black crown, which symbolizes the vastness and unchangeable essence of buddhanature. The first Karmapa, Dusum Khyenpa, lived in the 12th century in Tibet. He introducted the tradition of enlightened masters (tulkus), who can willingly influence their rebirth process in order to continue their activity for the benefit of all beings without interruption. In that way, the connection between teacher and student does not end with death, the student is guided over the course of many lifes by the teacher and led step by step to liberation. The current Karmapa Ogyen Trinley Dorje is already the 17th incarnation of the Karmapa.

Since his dramatic flight from Tibet in 2000 he has been living in the Gyuto monastery close the Dharamsala, India. Due to his manifold skills as scholar, meditation master, poet, songwriter, environmental and social activist as well as global spiritual leader he brings the activity of the Karma Kagyu lineage into the 21st century.

Short Biography of the 17th Karmapa

The current 17th Karmapa was born in 1985 into a nomad family in Eastern Tibet. His birth was accompanied by auspicious signs, and his family already believed that he might be a reincarnation of a Rinpoche, an enlightened master. Therefore, he was brought to a nearby monastery at the early age of four to receive education, but he still continued to spend much time with his family at home. In the late spring of 1992 he instructed his family to move the camp to another valley and to expect the arrival of traveling monks.

Indeed, soon after a group of Karma Kagyu lamas arrived, looking for the reincarnation of the Karmapa with the help of a prediction letter written by his predecessor, the 16th Karmapa. The letter contained detailed information regarding his year and place of birth and the name of his parents, which enabled the monks to recognize the young boy as the reincarnated Karmapa. His Holiness the 14. Dalai Lama soon confirmed the identification.

In June of 1992 he was brought to Tsurphu monastery, which is the main seat of the Karmapas in Tibet, and two months later he was inthroned as the 17th Karmapa Ogyen Drodul Trinley Dorje in the presence of thousands of Tibetans and Western visitors.

In Tsurphu he immediately started his studies of Buddhist mind science, rituals and sacred art. In addition, he gave audiences on a daily basis to hundreds of visitors. Soon he started to give empowerments and took part in many rituals of the monastery. At the age of 10 he started to recognized reincarnations of different Kagyu lamas.

Because many teachers of the Kagyu tradition lived in exile in India, he was not able to receive the empowerments and transmissions necessary for fulfilling his tasks. Therefore, at the age of 14 he decided to flee to India. On January 5, 2000 he arrived in Dharamsala after a flight of 9 days, where he met H.H. the Dalai Lama.

In India he continued his traditional studies, but he also started to study modern science and English language. Since his arrival in India he lives at Gyuto monastery in Dharamsala, where he receives thousands of visitors from all over the world. In 2008 he started his long awaited travels to the West in order to continue the dharma activities of his last incarnation. 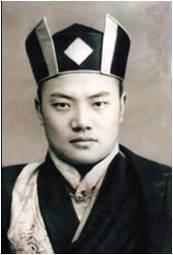