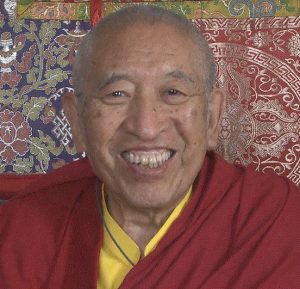 Thrangu Rinpoche was appointed as Khenchen, the highest abbot of the Karma Kagyu tradition, by H.H. the 16th Karmapa. Due to his profound and vast knowledge and experience he is responsible for the education of the lineage holders and he is the tutor of the current 17th Karmapa. He is also responsible for the preservation of the teachings of the Karma Kagyu tradition in exile.

In order to fulfill these responsibilities, he founded new monasteries as well as study and retreat centers in Nepal and India. He also established schools and a medical clinic, which are not only open for the monastics, but also for the local population. Since 1976 he traveled to Western countries in order to grant teachings and empowerments to his students all over the world. In the further course, he also established Buddhist centers in many Western countries, like the Thrangu Tashi Choling center in Cologne, Germany. Due to his high age his travel activity is now limited to Canada and some Asian countries.

The 7th Gyalwa Karmapa Chodrak Gyatso has founded the Thrangu monastery in Eastern Tibet around 500 years ago. He appointed Sherap Gyaltsen, the first Thrangu Rinpoche, as the abbot of the monastery. His Holiness the Karmapa recognized Sherap Gyaltsen as an emanation of Shubu Palgyi Senge, one of the 25 great Siddha students of Guru Padmasambhava.

The current 9th Thrangu Tulku Rinpoche was born in 1933 in Tibet. At the age of 4 years he was recognized as Thrangu Tulku by His Holiness the Gyalwa Karmapa and Palpung Situ Rinpoche.

At the age of seven his education was started. He learned to read and write, studied grammar, poetry, astrology etc., memorized texts and studied their meaning. With 16 years he began with the study of inner knowledge and philosophy. Under the guidance of Lama Khenpo Lodro Rapsel he went through a thorough study of all important texts.

At the age of 23 he received the Gelong ordination from His Holiness the Karmapa, together with Chogyam Trungpa Rinpoche and Surmang Garwang Rinpoche. He was introduced to the absolute nature by Lama Khenpo Gangshar Wangpo.

In 1959 Rinpoche fled into Indian exile, pursued by the Chinese occupants. Upon request of His Holiness the Karmapa he went to Rumtek in Sikkim.

With 35 years he took the Geshe examination in sutra and tantra in the presence of 1500 monks of different lineages. He received the title Geshe Ramjam, which is the highest scholarly title of the Tibetan Buddhist tradition.

He was appointed as Khenchen, which is the highest abbot of the Karma Kagyü lineage, by H.H. the 16th Karmapa, and he became responsible for the education of the lineage holders. Together with Khenpo Tsultrim Gyamtso Rinpoche he is the leading Khenpo of the Nalanda Institute of Higher Buddhist Studies at Rumtek monastery.

Thrangu Rinpoche is the lineage holder of the Shentong lineage, which was passed on by Jamgong Kongtrul the Great.

In 1976 he founded a retreat center in Namo Buddha in Nepal. In 1981 the shedra Thrangu Tashi Chöling was established in Boudhanath, Kathmandu. Upon invitation of Chogyam Trungpa Rinpoche Thrangu Rinpoche became abbot of Gampo Abbey in Canada. He teaches worldwide, visits his centers and also follows invitations of other Buddhist centers.

Rinpoche always dedicated his time and energy to the Buddhist dharma by assisting others in the development of their own inner potential.

TCHÖ PAL SANG PÖ YÖN TEN KHA GYAB TU
You spread the good qualities of the marvelous dharma, so that it fills the space.

PHEL SHIN SHAB PÄ TAG TEN SHÄ DUB KJI
May your life be long and steady,
and may your activities for explaining the teachings

TIN LÄ CHOG LÄ NAM GYAL PAL WAR SHOG
and for leading to their realization, radiate wonderfully in all directions.