„This place is very suited for meditation. Huge blessings will go forth from here. This place is an eight-petalled lotus, and in the middle of the lotus is an eight-spoked dharmawheel. Due to its turning, all dharma centers in Germany and all practitioners will be protected.“

Since 1986, with interruptions, the traditional Three-Year Retreats of the Karma Kamtsang tradition are performed in the Retreat Center Halscheid. In the meantime, the fifth cycle has ended, which began on the Tibetan Buddhist holiday of Lha Bab Duchen on 20.11.2016 and ended on Chotrul Düchen on 09.03.2020.

The Three-Year Retreat is a very important form of retreat within Tibetan Buddhism, and especially within the Kagyü tradition. In such a retreat all important meditation practices of the Karma Kagyü tradition will be learned, and countless yogis in the past have become siddhas through these practices. Even if this high goal cannot be reached during the Three-Year Retreat, nevertheless the course is set toward this goal, so that it will be reached through intense practice at a later timepoint, according to Thrangu Rinpoche.

The importance of such long-term retreats was also stressed by H.H. the 17th Karmapa during his visit of Halscheid Retreat Center in 2015. H.H. blessed our retreat place and met with former and current Three-Year retreatants. 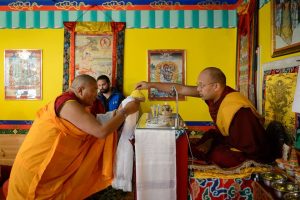 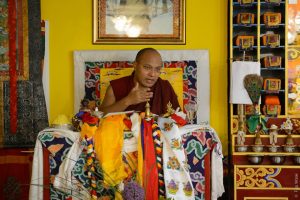 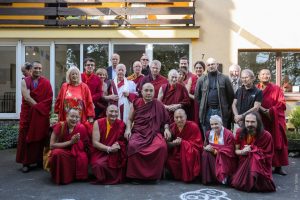 H.H. the 17th Karmapa Ogyen Trinley Dorje during his visit at the Retreat Center Halscheid in September, 2015

Program of the Three-Year Retreat

The Three-Year Retreat is aimed at acquainting oneself with the essential meditation practices of the Karma Kagyu lineage. Besides that, one will learn to make tormas, playing different ritual instruments etc. The program gets slightly adapted from cycle to cycle, depending on individual circumstances.

Normally, the retreat starts on the high Tibetan Buddhist holiday of Lha Bab Düchen (mostly around November), which is said to be especially auspicious for starting a retreat.

The retreat starts with the Ngondro, the Preliminary Practices. These are the contemplation of the Four Thoughts That Turn the Mind, refuge, development of bodhicitta, and prostrations. Next comes accumulation of the Vajrasattva mantra, mandala offering, and general guruyoga. The Ngondro practices will stretch over a period of approximately nine month.

After this, the retreat continues with the special guruyogas, like Milarepa guruyoga, Karma Pakshi guruyoga, Marpa guruyoga or Gampopa guruyoga. The practices of guruyoga help to envoke the stream of blessings of the great masters of our lineage for our own practice. Usually, the guruyogas will be practiced for one month each, but not every guruyoga is practiced during each cycle of the Three-Year retreat.

After the special guruyogas, shine and lhagthong are practiced for 1-2 month, in the general context of Mahamudra practice.

Subsequently, there follows the first yidam practice of Vajrayogini, which will stretch over the time-period of about one year, with outer, inner and secret practice.

This is followed by the Six Yogas of Naropa, which will be practiced for six month, and include tummo, illusory body, dream yoga, clear light, bardo and phowa practice.

Finally, Chöd and the long-life practice of the White Tara are practiced for about 2 weeks each.

Possibility for individual adaption of the Three-Year Retreat

If one has no financial problems, no familial responsibilities, if one has time and the right motivation, then one can perform the whole meditation program alltogether in one piece, and this brings the greatest blessings, according to Thrangu Rinpoche.

But not for every person, who wants to do the Three-Year Retreat, this four conditions are met. In order to adapt to the conditions in our modern time, where many people cannot go into retreat for the full period of three years, Thrangu Rinpoche has offered already in 2002 the possibility to conduct the retreat in a flexible manner. The time-period of three years and three month can be broken up into smaller time units, therefore enabling retreatants to do the entire retreat program in individual time-periods.

It is important to carefully select the duration of each time period in order not to fragment the retreat too much. Therefore, Thrangu Rinpoche suggests i.e. to stay for at least three month at the beginning of the retreat, and to complete the prostrations within that time period. For shorter retreats he suggests a minimum duration of one month.

Daily Schedule During the Retreat

The day is structured in four individual sessions (thuns), in addition there are two common pujas in the shrine room.

In order to continue with the Three-Year Retreat program, we need the support of our sangha to offer the retreat at reasonable costs. By supporting our retreatants, one can participate in the merit in the same way as one would do the retreat oneself. This is a great opportunity for everybody, who would like to do retreat, but is not able to do it oneself for different reasons. Even a small contribution can help our retreatants to continue with their practice for the benefit of all mother beings.

The bank details for donations are as follows: